This year for the holiday season, I decided to try to hook up the Christmas tree to Alexa. I drew inspiration from Jeff Sacks’ awesome RubyConf talk, Voice Controlled Home Automation in Ruby, in which he showed how to hook up Alexa to his TV and TiVO.

I opted for a much more modest goal than Jeff’s - I just wanted to turn my Christmas tree on and off with Alexa. I originally thought about trying to have Alexa enable “christmas mode”, which would turn on some music, kill all the lights, light the fireplace, and turn on the tree for a grand finale. I decided on a much more modest goal, and hopefully also avoided burning down the entire building.

Luckily I already had all this stuff laying around from older projects.

I wanted to use as much IoT hardware that I already had, so the setup needed to be pretty simple. I also wanted the whole thing to be serverless, so Amazon Lambda functions seemed like a good tool.

Turning on the Christmas lights was on and off was pretty simple. I had an IoT Power Relay laying around. This device lets you control a power outlet with a Raspberry Pi, Arduino, or other Microprocessor. I used an Electric Imp because I had one that my friend gave me a while back. (Thanks Ali!) The Imp is great because it has a web interface that you can hit with GET requests.

This is ideal for several reasons. First, the Imp has its own web server, so I don’t have to host any code. Second, I don’t need to open up ports on my router to the public internet. Jeff solved this problem by using Amazon SQS. Basically, his Lambda function would put a message on a queue, and then his local webserver would poll the Queue for messages every second or so. Kudos to Jeff for such a clever solution! I think our setup will be a bit simpler, thanks to the Imp’s web server!

And the device code:

Wire up the Imp

Great! It works just as expected. Next, let’s create a Lambda function to do the same thing.

Fill out the form like this - we want to author it from scratch, we want the Node.js 6.10 runtime, and a basic role for lambda execution. If you don’t have the role yet, set it up now. 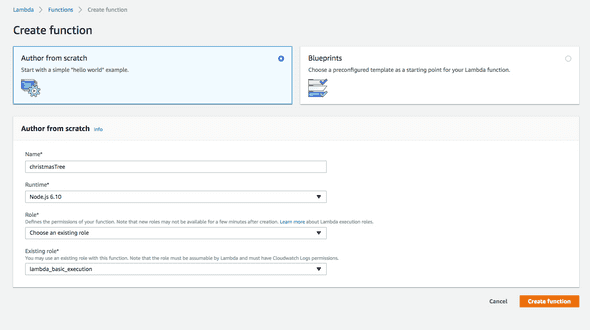 We need it to make a single web request, so it won’t need to be much more complicated than that. Paste this in there:

This part was tricky at first. I wanted to be able to say Alexa, turn on the tree, but the phrase turn on… tells Alexa to look for a Smart Home Skill API. That’s a little more complicated to set up, because you have to register your Smart Device and authenticate it. Let’s avoid that for now.

Since we need to stick to custom skill invocations, we need to pick something along these lines:

Some of these are a little clunky, but they’ll do the trick. (Let me know if you have better ways of solving this!)

Here’s a good doc from Amazon that thoroughly explains all of the invocation details.

Next up, we define the interaction model. Amazon has a new Skill Builder with a slick UI in Beta that I really enjoyed using. Click on Launch Skill Builder (BETA)

We will need two Intents - one to turn the tree on, and another to turn it off.

I named them TreeOnIntent and TreeOffIntent. After we name the intent, we need to add utterances. These are the things that come after the invocation name when someone is speaking to Alexa. After you do this, make sure your Lambda function code has the correct intent names.

For the TreeOnIntent, I used these utterances:

Make sure you add a TreeOffIntent, and write down some utterances that are the opposite of what you had for the TreeOnIntent. Next, click Save Model and then Build Model in the top menu. This step can take a few minutes. Once it’s done, click on Configuration in the top menu bar. Now we’re back out in the configuration wizard. This is where we hook up the Lamdba function. Go back to the page where you created your Lambda function and find the ARN in the top right corner.

Before we hit Next, we need to set up the event source type for our Lambda function. Keep this page open, and go back to the same AWS Lambda page where you found the ARN and click on Alexa Skills Kit from the list of Triggers.

This is where we test the utterances. Try typing any of the utternaces in the Service Simulator.

If it looks like this and your tree turned on, it works!!

Your skill should automatically be enabled in your Alexa account, but you can go check it out by logging into your account at here.

And that’s all there is to it!

Have you worked on any cool home automation projects? I would love to hear about them - let me know on twitter!